Figure 1 is just my imagination about the evolution of google software/hardware dataplane at the end-hosts. 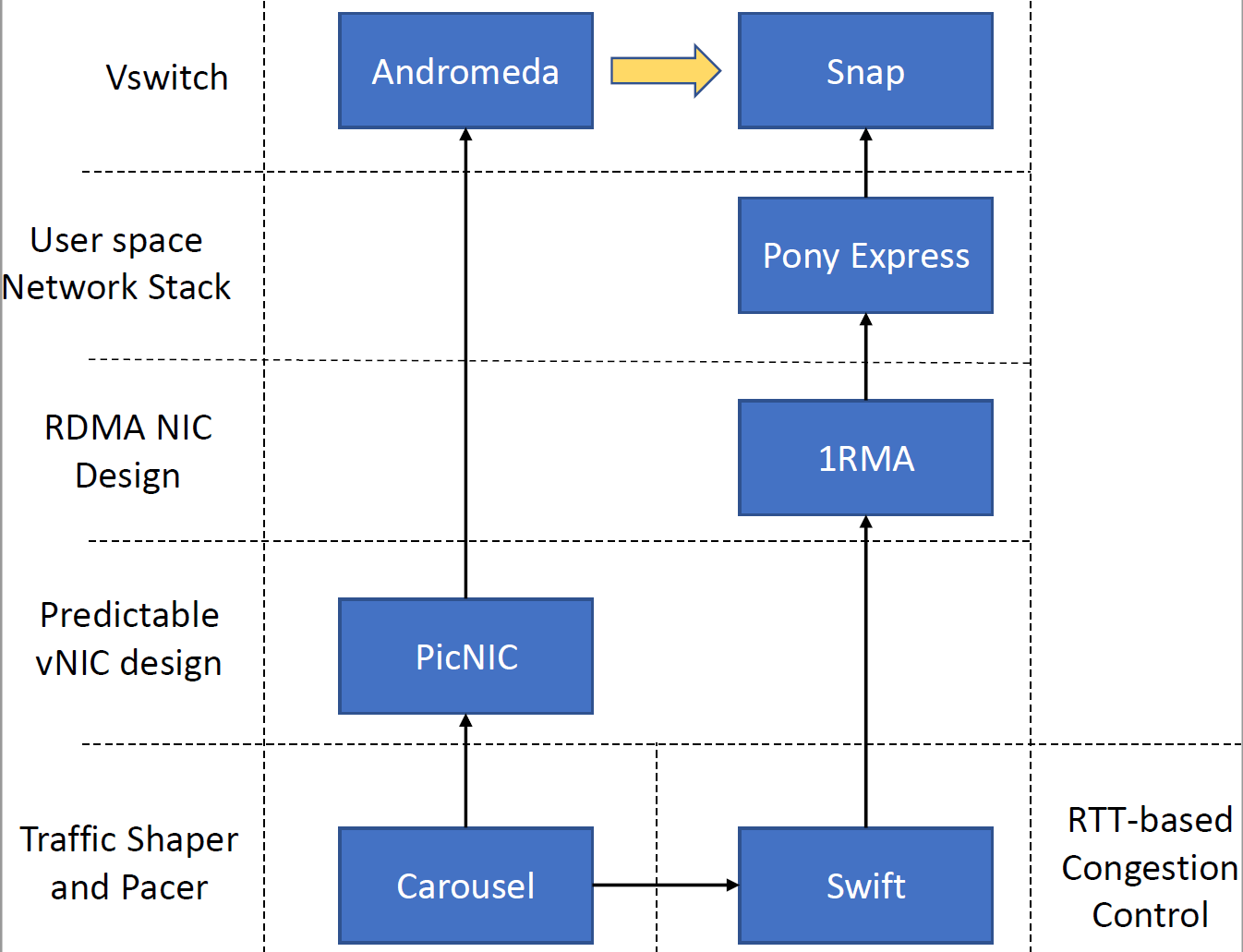 The prior system of Snap, I believe to be andromeda [NSDI’18]. Andromeda has severe problems particularly related to head-of-line (HOL) at the virtual NIC. They solve HOL blocking problem by building a predictable virtual NIC (PicNIC [Sigcomm’19]).

Carousel implements packet scheduling so efficiently that it can easily scale up to thousands of flows (I don’t know the CPU overhead of this piece of software). I think Eiffel (NSDI’19) tries to address CPU overhead of the timing wheel. Note that Eiffel is not a google paper. However, I believe they have adopted that in the Snap as well. In summary, Carousel is a traffic shaper and pacer. I’m guessing Carousel is a very nice idea to be offloaded to NIC. Maybe a Loom-like Carousel would be a nice thing to have.

Now Pony Express is the beating heart of Snap regarding the networking services. It includes the congestion control subsystem (Swift [Sigcomm’20]). I think the main insight in the swift is that end-hosts can be congested and drop packets. The system must differentiate between two cases. First, congestion at the end-host and congestion in the network. Congestion in the end-hosts happens due to improper process scheduling, thread managements, wrong queuing, and load balancing. Also, the are hardware limitations as well including PCI-e crossing considerations. There are two different congestion windows for swift, local congestion window and a remote congestion window which we should always pick the min of these two.

In this system, software with general-purpose CPUs handle almost everything. There is a trade-off between pushing various functionalities into the hardware or keep everything in the software. However, I think there should be a middle ground. There are some tasks that hardware is good at, and there are some other tasks quite suitable for the software. The more complex the functionality, the more reasonable the software.

On that note, 1RMA [Sigcomm’20] comes to the game. 1RMA is a middle-ground solution. I think the idea of 1RMA is that we should keep complex functionalities in the software, like what? Like congestion control and flow control. However, we might manage to offload encryption into the hardware. RDMA is an excellent solution for low CPU utilization and low tail latency. Unfortunately, RDMA also has some limitations which I’m not going to dive into. 1RMA achieves higher performance compared to its counterparts because it can apply simple policies in the hardware. It can separate latency-sensitive and throughput-sensitive messages in the hardware. It also benefits from a new design that manages to scale the number of connections (it is not connection-oriented anymore).